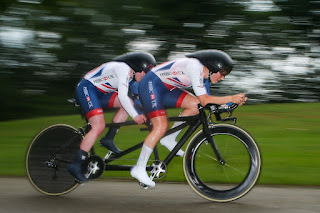 There was a silver medal for Lora Fachie and Corrine Hall on the opening day of the UCI Para-cycling Road World Cup in Emmen.

It was the first race together for the pairing since Rio, and their time of 35.08.05 was enough to secure them a silver medal behind the impressive Irish pair of Eve McCrystal and Katie George Dunlevy.

Despite missing out on the top step of the podium Fachie and Hall were both delighted with their performance in their first competitive ride together in 2017.

Hall said: "It is good to be back on the podium. There's still work to do, which, again is quite exciting. It's our first race back from Rio, we've been apart for a while so it's nice to come back and get straight on the podium but we know we've still got work to do."

There were also bronze medals for Steve Bate and Adam Duggleby in the men’s tandem time trial and Simon Price in the men’s C2 classificaion.
on June 30, 2017
Email ThisBlogThis!Share to TwitterShare to FacebookShare to Pinterest