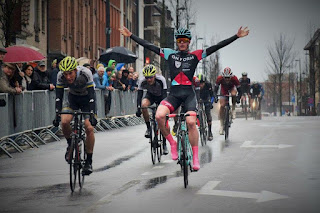 BIKE Channel Canyon have handed professional contracts to a pair of promising British junior riders.
Louis Rose-Davies and Charles Page, (above) both 18, will join the UCI Continental outfit as first-year seniors in 2018 after penning one-year deals.
Sports director Tim Elverson is delighted with his new recruits and believe their arrival underlines his commitment to developing young talent.
He said: “I want to keep that core of six under-23s within our squad. We have got a few guys who will move up next season, so bringing Louis and Charles in is important.
“They are both exciting prospects. I have signed them nice and early because I want them to relax into knowing what they have coming.
“There is a possibility one or both may ride as stagiaires for us from August 1, too. I have got to go through it yet but I do have that option.
“We have a couple of European races which may be good to let them have a roll out before we close down for the year.”
Rose-Davies, who hails from Chertsey and currently rides for Canyon UK, recently clinched the Kingdom Junior Classic crown.
Among his other notable results this season are top-10 finishes in the Ster der Vlaamse Ardennen, Junior CiCLE Classic and a trio of National Bs.
Page, meanwhile, finished fifth in the Kuurne-Brussel-Kuurne Juniors, fourth in the Cadence Junior Road Race and seventh in the Junior CiCLE Classic.
Both riders started out with the Hillingdon Slipstreamers club, with Amersham’s Page now dividing his time between Cycle Team OnForm and French under-19 outfit Culture Velo.
Elverson added: “I have worked pretty hard at keeping an eye on what is going on. I have known both lads for a long while and I have no doubt they will fit in well with us.
“Louis is gritty. He is aggressive and that’s good for our style of racing. He is really focused and very good for a tough day out, which is important.
“It can be hard to transition from junior to senior but, hopefully, his character suggests he will cope well with the step up.
“Charles is quick. He has been around a while, learnt his craft and has a lot to give. He is very capable and reminds me of what I used to see in Rory (Townsend).
“I really like his attitude. He wants to be a professional bike rider and he has shown plenty of ability which is promising.”

on June 27, 2017
Email ThisBlogThis!Share to TwitterShare to FacebookShare to Pinterest