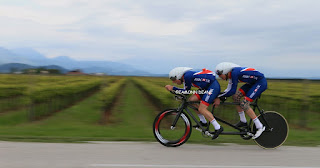 Adam Duggelby & Steve Bate
British Cycling has named the Great Britain Cycling Team that will compete at the final UCI Para-cycling Road World Cup of the season in Emmen, Netherlands from 30 June – 2 July.

Steve Bate and his pilot Adam Duggleby got their 2017 season off to a successful start at the first para-cycling road world cup winning time-trial gold in Maniago and they’ll be aiming to repeat that success as they work towards their ambition of becoming world champions for the first time.

Podium Potential rider Will Bjergfelt will also compete in Emmen as an independent rider.

The team enjoyed a successful start to their road season in May picking up two gold, two silver and three bronze medals across the opening events in Maniago and Ostend as they build towards the UCI Para-cycling Road World Championships in South Africa at the beginning of September.

Great Britain Cycling Team para-cycling head coach, Jon Norfolk, said:
“The world cup in Emmen is the final major event for the team before the world championships in South Africa and we’ll be looking at performances in the Netherlands with selection for that in mind.

on June 19, 2017
Email ThisBlogThis!Share to TwitterShare to FacebookShare to Pinterest