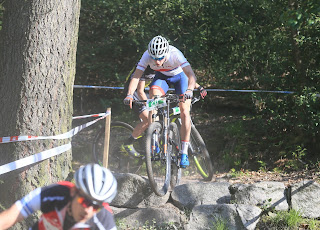 British Cycling has confirmed the three riders who will represent the Great Britain Cycling Team at the next round of the UCI Mountain Bike World Cup presented by Shimano in Vallnord, Andorra, from 1 – 2 July 2017.

Senior academy riders Ella Connolly and Evie Richards along with Frazer Clacherty will line up in Great Britain colours to contest the under-23 categories for the third world cup of their season.

British Cycling’s lead mountain bike coach Simon Watts said: “I’ve been impressed with the performances I’ve seen in the world cups so far this season and I’m looking for the momentum to continue in Vallnord.

“Evie Richards won the silver medal as a junior rider in the world championships held on this course in 2015, and she’s having a really good season so far. She won the previous round of the world cup in Albstadt and finished second prior to that in the Czech Republic so she’ll be gridded first on the start line in Andorra. Frazer Clacherty recorded a career best result of a sixth place finish in Albstadt and this will see him gridded on the second row for this round of the world cup. Ella is in her first year of the under-23 category so her objectives are based around her performance on the first lap of the race and I’m looking for her to continue progression in this area rather than the overall result.

“The course in Vallnord has been on the world cup calendar for some time now and we know that the altitude can significantly affect the riders’ performance, so we took that into consideration as part of the team’s preparation for this race.

“We’re currently in Andorra on an altitude camp where we’ve been for the past two weeks. The riders have found the conditions at altitude to be very demanding but the Great Britain Cycling Team support staff have managed the adaptation process successfully and as a group the riders have worked hard to support each other. It’s been brilliant for their development as mountain bikers as they’ve learnt about how altitude affects their bodies and what they’re capable of if they manage the situation properly. I’m looking forward to seeing how all the riders get on after this good block of training.”