"Sponsored teams contributing to the sport would be a refreshing change"

Three illustrations that highlight a BIG issue with our sport today… Julian Gee (Sotonia CC) offers his thoughts on the rise of sponsored teams and the challenges facing traditional cycling clubs promoting races.

I was prompted to write this by reading the Facebook post below earlier today…from a race promoter appealing for help running one of the increasingly rare road races in the South. That’s a lot of positions to fill and I hope the club is successful in finding the assistance needed (I’m going to try to be there for one). 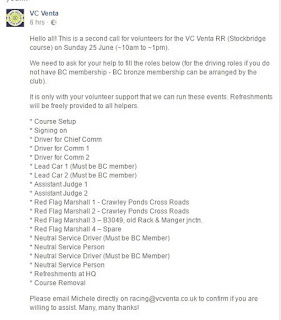 The club concerned, Winchester based, VC Venta, has done an excellent job for our sport in the past few years, as it was not that many years ago that it almost folded and merged with another local club. However, I have been delighted to see them rise ‘phoenix like’ to become a major player in the region. They’ve done this not just with getting in riders and entering races but by developing a rounded ‘club’ and contributing to what is, in comparison with earlier times, a pretty meagre list of road events on the calendar, both by running both circuit and road race events such as the race mentioned above, as well as events in other disciplines.
However, clubs like VC Venta are very much in the minority these days. The two excerpts below have been taken from a very popular local cycling website during the past 3 months, and talk in typically grandiose terms, about the proposed activities of two of the newer types of clubs today.

"We are a very unique set up with a focus on winning at the very top level, but with a support network for all categories of rider"

What we plan to do in 2017
• Develop riders who want to race in the biggest races possible. We’ll be heading to big National B races mainly in the southern and central regions. Also a small handful of National A, premier calendar events to mix it with the big boys.
• We hope to have a big presence at local circuit series like Thruxton, Goodwood and Hillingon.
• We also have riders who perform well in the Wessex Cyclocross league, Calshot and Newport Track Leagues.

You will note in the examples above, no mention of organising their own events, or indeed assisting other clubs runs their events, just a list of ‘targets’. Am I alone in thinking that some indication that these new outfits might contribute to the sport other than just turning up mob handed at other events, would be a refreshing change? Don’t get me wrong, I have no axe to grind against the two ‘teams’ used as examples here, I don’t know their riders or who runs them (and I could have easily used many other examples from recent seasons) but it’s their attitude that I feel is so wide of the mark.
Well what’s the answer? In the short term, it’s easy. A few riders from each of the clubs/teams that don’t organise their own events and were planning to ride this event, volunteer to give up their entries and offer to help run this event – I challenge their ‘team mangers’ to take the lead and do this…
Longer term it’s a little harder, but in simple terms our sport needs more clubs like VC Venta and maybe not as many of ‘XYZ Racing Team’ and ‘Team Bob’s Bike Shop’, otherwise road events in the south will disappear for ever, and clubs like VC Venta will say ‘why should we bother?’, and I for one wouldn’t blame them.

on April 19, 2017
Email ThisBlogThis!Share to TwitterShare to FacebookShare to Pinterest