The miles go up the numbers go down, just 59 sign on for the Bournemouth Jubilee Wheelers 100km Reliability trial, half that for the 50 mile event a month ago. Frost along the Cowgrove on a bright, cold December morning but thankfully no ice. The "Hilly Hundred" lives up to its name, starting with the climb from Blandford, up past Byanstone school, little ring at the bottom, big ring at the top, then fast down to Winterborne Stickland, the shiny surface keeping us in check. Right in the village and we are climbing Bulbarrow, not all the way to the top but we gain height that is quickly lost dropping down through Milton Abbas, again the frost keeping us cautious. Milborne St Andrew and Bryantspuddle bring us to Clouds Hill, T E Lawrence lived here and died here, the memorial stone is not visible from the road, not that anyone was asking. Through Bovington camp and Wool, then Coombe Keynes to East Lulworth, the heavy course taking its toll. Up and over to East Creech, the duckpond then right, the climb of Cocknowle strings us out, frost & wheelspin on the northern aspect, sun and the purbeck hills to the south. On to Corfe Castle, never tire of the view but it is brief as we head across Middlebeare Heath, the pace picking up through Ridge and Stoborough and across the causeway to Wareham. The legs can feel it now, the rolling road to Morden is a hard place to hide and the fiddly lanes around the village are annoying when tired. A second wind and just in time, Lytchett hill then Pardys require some muscle. The usual blast along Merley Park Lane brings us home to the community centre. Time for a cup of tea, a quick debrief, "cor, that was hard" then the chore that is Castle Lane and another cuppa at home.
4hrs 41, 84 miles 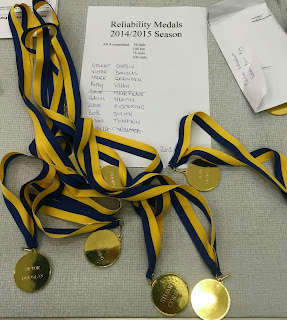 on December 04, 2016
Email ThisBlogThis!Share to TwitterShare to FacebookShare to Pinterest