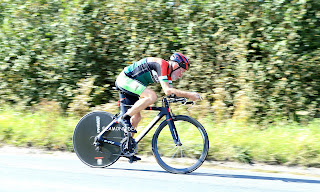 New Forest CC's 65-year-old veteran Bob Jolliffe has just returned from the European Transplant and Dialysis Games in Cagliari, Sardinia clasping two medals.
Bob said: "I went fairly well, though no gold medal.
"It was silver in 5km tt and silver in the road race, reduced from a very short 20km to a miniscule 14km!
"I was happy about the road race, but less so the time trial, which I could not settle into.
"I was pleased to get the medal, but not about my time, which was 9mins .03secs and just over a minute behind Alain Fossard of France (7-59).
"Alain is a big powerful rider. A typical roleur. Last year in the Transplant Worlds in Malaga the course had a hill at each end and I beat him by .1 of a second, but this year in the European Games, the course suited him more, being absolutely pan flat with salt lagoons and pink flamingoes on the south side of the road, whereas I might have stood a chance against him if there had been a slope or two.
"Because of time limits on the road closure for the road race the field was condensed into two fields with the races both shortened.
"The first race was for 40 to 59-year-olds. The second brought together the women, 20-year-old males, 30-year-old males and 60-plus year-old males.
"It was fast from the off. I had to work hard to get into the second group of seven or eight relative youngsters, plus Alain Fossard.
"There were another two riders already up the road, Dutchman Tim Hartman and UK and Northern Ireland's Ottilie Quince. Soon another teammate, William Black from Edinburgh rode up to them to make three.
"I maintained my position in the group until the last kilometre when I managed to pull my foot out of the right pedal on the last turn and lost a couple of seconds which stretched into a four second lead on the line for Alain.
"I overtook William in the last 500 metres and he ended up with bronze in the 30 to 39 age group.
Ottilie, who owns a cycle shop in Majorca, took second overall and was first woman in the race, two seconds ahead of Alain. By then she had been outdistanced by Tim Hartman.
Relevant road race times:
Tim Hartman, Gold, men age 30-39, 22-48; Ottilie Quince, Gold, women, 30-39, 23-37; Alain Fossard, Gold, men 60-69, 23-39; Bob Jolliffe, silver, men 60-69, 23-43; William Black, men 30-39, 23-46; Giorgi Arduino (Italy), bronze, men 60-69, 26-30.

on June 26, 2018
Email ThisBlogThis!Share to TwitterShare to FacebookShare to Pinterest