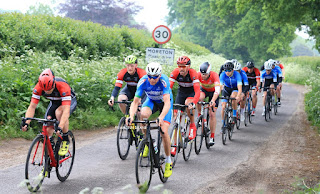 The cancellation of round 5 of the Moreton kermesse on 31st May, must cast doubt over the whole series. With just 6 riders pre-entered organisers, Steve Dring & Richard Lang called the race off on Thursday afternoon. Just three years ago the racing was oversubscribed with 60 riders signing on a full week in advance but this year numbers have been down from the start. Goodwood, Thruxton, Odd Down, Henstridge and the return of the Heath races have given plenty of choice to local riders and perhaps the "boom" of the last few years has bust! Run under TLI regulations, as an Australian pursuit (handicap), Moreton offered a great introduction to bunch racing for local novices and a good mid-week "hit out" for the big boys, it would be a shame to lose it from the calendar. Richard Lang posted the following on social media:

"We have had to take the difficult decision to cancel tonight's round of Moreton due to very disappointing number of pre-entries.
We need at least half a field to get anywhere near to break even. We had 12 pre-entries last week and 8 tonight :(
If it carries on like this then the series will inevitably stop running.
If you have previously raced Moreton and no longer do so, we would be very grateful for any feedback on why that is. Comment or private message."
on June 01, 2018
Email ThisBlogThis!Share to TwitterShare to FacebookShare to Pinterest