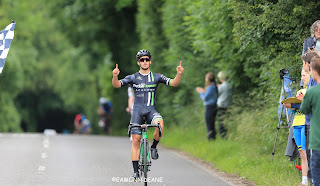 Will Harper wins the Divs, 2016
This Sundays (20th) South Region Road Championships has attracted a full field of 80 riders and looks set to be an exciting race, with some top names looking to lift the crown. Last seasons champion Will Harper (OnePro Cycling) returns to defend the title he won on Stockbridge Down but will have his work cut out as the championship returns to the Owlesbury Circuit near Winchester. Tristan Robbins (Raleigh GAC) & Will Bjergfelt (Neon Velo CT), 2nd & 3rd at Owlesbury in 2015, will try again, expect a trademark first lap attack from Bjergfelt, although an early break seldom succeeds on the heavy Hampshire roads. Benjamin Marks (Morvelo Basso) has won on the circuit before, came second behind Harper last term and as always, will be well motivated and in the thick of the action. Mitch Webber (Bike Channel Canyon), Jack Billyard (Zappis Racing Team), Junior champion in 2015, Lee Frost & Oscar Hutchings (VC Equipe-Flix), Liam Walsh (VC ST Raphael), Etienne Georgi (Team Wiggins) & Matt Downie (Primera-Teamjobs) will all be looking to make the title deciding selection. This year the race incorporates the South-West region, with Matt Langworthy & Ben Lockett from the Cornwall-based St Piran team adding to Harpers concerns
" It's a really strong entry with a handful of strong Pro's in their it will be a very hard race. Its a course I really like , but it's much harder in terms of tactics. The break could go anywhere , whereas the big hill at Stockbridge makes it more predictable. I expect I'll be closely watched which always makes it more difficult, but I'll get stuck in. The Saint Piran guys will be a threat ,they've been racing strongly this season. Obviously Mitch Webber and Ben Marks are also very dangerous on their day." Harper told "LR,LR"
Former GB rider Kieran Page (Wightlink Wight Mountain) was a late entry, Page rode for Great Britain in the mid-nineties before leaving the sport to run a cycle touring business
in France, he made an appearance at the Tour Series on the Isle of Wight two years ago but his current form is unknown. 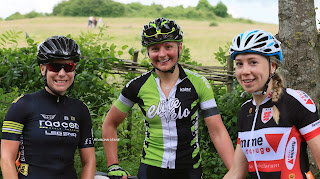 The defending champion also returns in the preceding Womens race with Jennifer Powell (TeamFord EcoBoost) being joined by Silver & bronze medalists from last year, Fiona Redding (Radeon Bike Science RT & Florence Cox (Equipe Flamme Rouge). Fourteenth in the recent Ryedale Grand Prix Powell is in good form and she will need to be,Kimberly Ashton (Casp Racing), champion in 2015, Rebecca Carter (Team WNT), Jennifer Holden (Fusion RT Fierlan) & Phoebe Davis (VeloVitesse) will all put the champion under pressure. South-West riders Emma Cockroft (Bianchi Dama UK),9th at Ryedale and Adele Martin (Team Ford Ecoboost) will also be in the mix, Powell & Martin teammates but effectively in separate races will be an interesting one.The biggest challenge may come from second year junior Pfeifer Georgi (Liv Cycling-Epic Coaching), the British Cycling academy rider has enjoyed a great season winning the Junior Gent-Wevelgem in Belgium in March. A bronze medal in the Madison with Jenny Holl at the European Junior Track Championships in Portugal was followed by victory in the Junior 25 mile Time Trial championships, her winning time of 54:51 nearly 5 minutes clear of another South junior Caitlin Peters (i-Team). Georgi's track speed, ability to ride solo if required and the freedom that only comes with being 17 makes her one to watch.

Powell told "Local Riders"
"I am really looking forward to the race at the weekend. The course looks like a good one, its always nice to try new course and see what they result in. As for defending champion that means that everyone on that start list is a challenge for the title. It will make for an interesting race having both south and south west riders involved. If am honest it just nice to head down south for a race most have been up north! Makes a nice change for the journey" 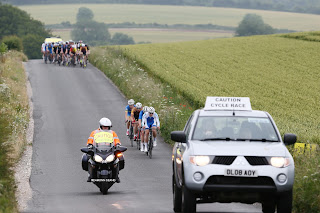 Longwood Down, Never steep but could be decisive?

Predictions: Sticking our neck out!

We think the big hitters will keep their powder dry as the early breaks burn matches. The move will come after 60 miles and it will be decisive, those that miss it will fight out their own battles for pride and the minor placings. Up front the phoney war will be over, title contenders will have to play their cards, the final climb of Longwood Down could be the place to strike or the time to stay calm? Team Wiggins rider Etienne Georgi is our tip for the title, second in the junior race last year Georgi has been "racing up" all season and will be confident,comfortable and up for it!

Women
The race will split on Longwood Down, the strongest going clear early and the parcour will continue to do damage thought-out the 60 mile race. The long drag up Salt Lane to the finish provides opportunities, the title can be won with a brave, committed solo attack, courage is needed but there are no guarantees! We are going for a family double, Pfeiffer Georgi will have too much speed, too much staying power and no fear.

Most Aggressive riders –£50 Women & Men (any region), Sponsored by www.localriderslocalraces.co.uk

Course Details
The race roll out from the HQ will be neutralised along Longwood Road toward the crossroad junction with Belmore Lane (M). At the junction turn right onto Belmore Lane and proceed up hill; almost immediately after the crest of the hill the road drops away to the left followed by a sharp right hand bend where extreme care is needed – the race will be de-neutralised after this point. After a series of rolling hills the race turns left (M) into Salt Lane and climbs up to the Milbury’s Pub crossroads. Just before cresting the Salt Lane climb riders will cross the finish line for the first time (there will be a further 10 laps). At the crossroads (M) the race turns left for a fast decent followed by a sharp climb to the Longwood Road junction, at the junction the race turns left (M) and descends to the junction with Belmore Lane where the race will turn left (M) to complete the circuit. Riders will cross the finish line 11 (eleven) times in total.


The Junior championship race was cancelled, organiser Mark Williams receiving only 13 entries by the closing date compared to 43 entries last year when the race was held in late June.

on August 15, 2017
Email ThisBlogThis!Share to TwitterShare to FacebookShare to Pinterest