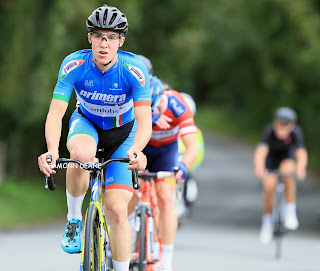 "It starting sinking in on the ride home. Even though it was raining I was feeling pretty upbeat"

Matt Downie had just won the 84 mile, South Region Road championship with an eye catching performance at Owlesbury. The bunch could be forgiven for not chasing the break that went after just 3 miles, few including ourselves thought it would succeed. The mistake was allowing the talent that was up the road to gain two minutes. The energy spent closing the gap proved costly, with the remains of the break tantalisingly close (20 secs), no one had the legs to get to the riders whose numbers they could almost read. The raw desire of Downie & Matt Langworthy, the experience of Lee Frost and the sheer determination of Andy Shackell & George Smith did the rest. The luckless Langworthy would puncture, Shackell finally ran out of gas but along with the early contribution from Will Bjergfelt, the damage was done:After the dust had settled we caught up with Matt......

"I think the peloton underestimated us in the break, with the likes of Lee and Matt in there we were so committed. Its good, that's how I like it to pan out really, I do get a sense of excitement when I prove people wrong. With half a lap to go i knew i would not be happy with anything but first, i was going for the win!"
Despite admitting to being "So happy with the result" Downie is already looking ahead to the next few weeks, starting at the Victor Berlemont Race in Oxfordshire this Sunday. 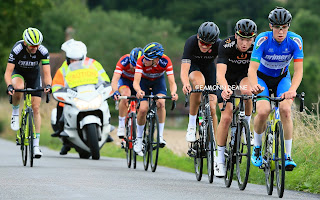 "I've been out getting ready for Victor Berlemont next weekend and I've got the Julian Jenkinson memorial 10 mile time trial that I'm aiming for and a few other tts that I would like to get fast times on but we shall see."

...and what about the future?

" I may have a chance over in Brittany next year which will be a great experience. I want to step up to higher level races such as Premier's and Nat Bs, week in week out so that'll help my racing for sure. Bill (Temple) and Jason (Gault) have been fantastic at Primera-Teamjobs, very supportive but hopefully i will get an offer from a bigger team. I want to work on my strength and conditioning this winter and my climbing, im pretty good at a power climb just not those steep long climbs,You can always improve in all areas of your cycling and the best way to improve something is to train it, so I guess I best get climbing. I probably won't take anytime off as I feel mentally and physically ready for some hard training through the winter Don't worry though I won't go crazy, don't wanna ruin next season!

on August 23, 2017
Email ThisBlogThis!Share to TwitterShare to FacebookShare to Pinterest