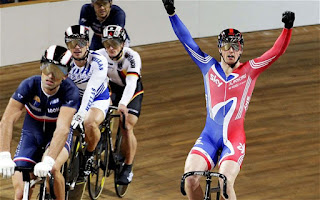 British Cycling has today announced the retirement of one of its longest serving track sprinters, Matt Crampton, who has been a member of the Great Britain Cycling Team’s Olympic programmes for over thirteen years.

Since joining the Olympic Development Programme (as it was then known) in 2003, Crampton has enjoyed a successful cycling career winning medals at Commonwealth and World Cup level.
During his years as a junior, he was crowned as the junior European champion in both the sprint and keirin events in 2004 as well as winning the silver medal a in the keirin at that year’s Youth Commonwealth Games in Australia.
In 2006, he represented England in the Commonwealth Games, this time at senior level, winning the silver medal in the team sprint, alongside Jamie Staff and Jason Queally.
In 2011 Matt won the gold medal in the keirin at the UEC Track Cycling European Championships and backed that up by winning the bronze medal in the team sprint at the World Championships. Matt went on to win the bronze medal in the 2012 European Track Championships alongside Callum Skinner and Lewis Oliva.
At the UCI Track World Cup in Manchester in November 2013, Matt won the team sprint bronze medal along with Jason Kenny and Phil Hindes. The trio went on to win silver at the next round in Mexico with Matt also adding a gold medal in the keirin to his collection. Matt missed out on Rio Olympic selection due to an injury.
Matt said: “Since starting on the squad in 2003 on the junior programme I have been training hard and dedicating my life to the British Cycling Olympic Programme. Although I was not selected to represent GB at the Olympics, I am extremely proud of all I have achieved throughout my career and of the effort that was given relentlessly to be a fundamental part of the squad.

“With this in mind, I have taken the decision that now is the right time for me to retire from professional cycling in order to enable me to pursue new challenges and develop myself in other ways including setting up my own coaching brand "Podium Fitness" along with other projects.

“I am appreciative and grateful of all the support given to me by the staff and fellow riders both past and present who dedicate themselves to British Cycling and its endeavours. I have forged great friendships during my time on the squad and wish everyone the best for the future.”
Former team mate Sir Chris Hoy said: “Matt was one of the hardest working, consistent and well liked members of the team over the last decade. The way he approached his career in such an unassuming and professional manner always impressed me. We had some great battles in individual events over the years and some great victories together in the team sprint. I’d like to congratulate him on a fantastic career and wish him the very best of luck on his next chapter.”

Iain Dyer, one of Matt’s former coaches and current head coach at British Cycling said: “Matt has had a stellar career with the Great Britain Cycling Team and he can be very proud with what he’s achieved. The podium results speak for themselves, but Matt has also proven himself to be a strong team player within the sprint squad, challenging them for their position within the team and pushing their development on in the process. In addition to his achievements on the bike, Matt has always shown a keen interest in the coaches’ work and the science behind what they do, which I think sets him up nicely for the next stage of his career with Podium Fitness. On behalf of the Great Britain Cycling Team I’d like to wish Matt the best of luck for his future.”
on November 23, 2016
Email ThisBlogThis!Share to TwitterShare to FacebookShare to Pinterest