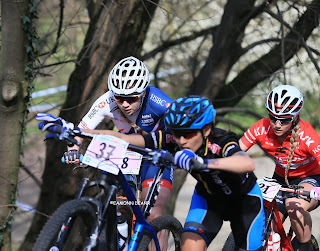 British Cycling has confirmed the three riders who will represent Great Britain at the next round of the UCI Mountain Bike World Cup presented by Shimano taking place in Lenzerheide, Switzerland, on 8 – 9 July.

The under-23 trio of Evie Richards,(above) Ella Conolly and Frazer Clacherty will contest the Lenzerheide round having all delivered good results at the previous round in Vallnord over the weekend.

Lead coach Simon Watts said: “We saw some really strong performances in Vallnord, with Evie finishing in third and Ella finishing in a career best 18th place. Frazer placed 16th which I was pleased with as his hard work is paying off and he’s starting to show consistency within the race.

“The course in Lenzerheide is technical with a mixture of natural woodland with exposed roots and rocks and man-made jumps and drops which make it spectator friendly. I’ll be looking for all three of the riders to build on what they’ve learned from the world cups so far and to back up their results from last weekend with more good performances this weekend.”