Mitch Webber, A Taste of Belgium! 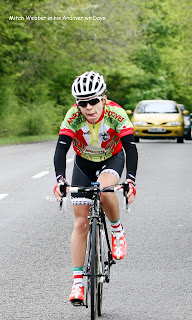 "On Saturday the 18th I rode the Kemmel Village Kermesse. It was 12 laps of an 8km circuit which climbed the lower slopes of the Kemmelberg and had a small cobbled section along the highstreet. A few attacks went in the early stages on the climb. Luckily I was able to follow one of these attacks and we soon established a gap. The break soon grew in numbers as people bridged across and it grew to 12 riders. With around two laps to go Luc Hall (Kuota-Spinergy-GSG) attacked and soon after James Shaw (Forme Bikes) bridged across. Once they went everyone was reluctant to work and it came down to a messy sprint. In the end I managed to come 7th which I was pleased with especially as it was my first taste of Belgium racing.
Sunday was the St Lodewijk Kermesse which was 18laps of a 5km circuit with a tough 500m climb every lap. A split formed on the 3rd lap containing 14 riders. From then on it was a war of attrition as the climb started to shell riders out. I was suffering on the last few laps as the group was attacking on the climb. With three riders managing to get away with three to go, it came down to an uphill sprint between the rest of the break away, which I came 5th in making me 8th overall on the day."
Cheers
Mitch
on May 21, 2013
Email ThisBlogThis!Share to TwitterShare to FacebookShare to Pinterest