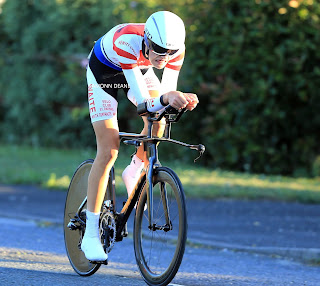 Fresh from his blistering ride in the Bournemouth Jubilee Wheelers club 10 we grabbed a quick chat with Harvey McLean (VC St Raphael/Waites Contracts) via social media. The 17-year-old from Andover stopped the clock on 20:09, the second fastest time ever on the “honest” P311 Ringwood-Sopley course, just 11 seconds shy of Tom Day’s week-old course record in what was only his third ever TT! "I was really hurting at the end as it was my first time on the course and had no idea when the finish would come."
Studying Maths, Physics & Economics at the Peter Symonds college in Winchester, McLean funds his cycling ambition with a part time job at Waitrose
“I think my next race will be the North Hants club 10 on the H10/3R on the 6th of August. I’m doing various other TTs in August like Goodwood on the 11th and the South DC 25 champs on the 23rd. My biggest target is to try and get a top 5 maybe top 3 at the junior 10-mile champs on the 30th. It would be a tall order as I’ve only starting TTing this year. I’ll give it a good go though. I don’t think I’m gonna bother with road racing this year, there’s no points on offer and wouldn’t want to crash after a great year of training so far. For next year though I plan to just gain as much experience as I can from doing a lot of Nat Bs and hopefully pick up some decent results.”
Thanks to Harvey and FaceBook Messenger

on July 29, 2020
Email ThisBlogThis!Share to TwitterShare to FacebookShare to Pinterest