Isle of Wight to Host Tour of Britain 2022 Final Stage 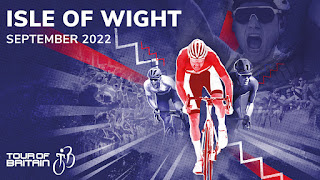 The Isle of Wight will host the Tour of Britain – the UK’s biggest and most prestigious professional cycle race – for the first time ever in September 2022, following an agreement between race organisers and the Isle of Wight Council signed this morning (Saturday 4 July) that will see the final stage of the 2022 race taking place on the island.

It will mark the first time that the Tour of Britain has visited the Isle of Wight, providing a unique opportunity for residents and tourists to watch the world’s top teams and riders racing on the Isle, in front of a worldwide live television audience.

The news was announced this morning – Saturday 4 July – following a signing ceremony in Ryde, which also marked the start of The Great Tour, a 64-day, 6,700 kilometre charity fundraising cycle, from Ryde.

The Isle of Wight is no stranger to hosting cycle races – the pro-am, cross-Europe Sealink International stage race (1983), the Isle of Wight Classic (1985) and the Tour Series (2015) have all taken place – although 2022’s Tour stage there will be the biggest sporting event ever to take place on its roads.

Isle of Wight Council leader, Councillor Dave Stewart said: “Securing the Tour of Britain is a major coup for the Island and just what is needed to help boost the local economy after the devastating impact of coronavirus.

“This is a wonderful opportunity to showcase the stunning landscapes of the Island to an international audience, attracting spectators locally and from afar to enjoy world-class cycling.

“This event will support our economy through hotel stays or spending money in local shops and businesses.

“Just as the Isle of Wight is synonymous with sailing, so too I hope we can become a mecca for all things cycling with Tour of Britain and other exciting cycling events in the pipeline.”

“We are delighted to be officially confirming in two years’ time we will be bringing the world’s best cyclists to the Isle of Wight for the final stage of the Tour of Britain, in what I am sure will be one of our most memorable stages,” said Hugh Roberts, Managing Director of Tour of Britain organisers SweetSpot Group.

“The fact that despite this summer’s events we are working ahead with partners and planning the routes for 2021, 2022 and beyond shows that despite adversity, the Tour of Britain will continue to flourish. We hope that seeing this news will inspire more people and organisations than ever before to get behind and support our national Tour and to help us reach our goal of making the Tour of Britain the biggest stage race outside of the three Grand Tours by the end of the decade.

“This is just the start of our relationship with the Isle of Wight, and through events like the start of the 64-day Great Tour ride today we will be working with the Isle of Wight Council and partners to put the island firmly on the cycling map in the 2020s and helping people to ‘Ride the Isle’. I look forward to returning to Ryde and the Isle of Wight in September at the conclusion of The Great Tour having hopefully done a lot to create a legacy route around Britain’s coastline and raised awareness and funds for a variety of community, health and environmental causes, and look forward even more to September 2022.”

“The Isle of Wight is well known for its sailing heritage and it’s also a brilliant place to ride a bike thanks to the unique and distinctive coastline and scenery, so I know the stage will be a landmark event in 2022’s sporting summer. While we will all miss watching this year’s Tour of Britain, it is great to see the organisers break new ground with a first trip to the island.”


The 2022 Tour of Britain is due to begin in Aberdeen and Aberdeenshire and finish with a final stage on the Isle of Wight. The exact date of the race will be confirmed next September following the publication of the UCI’s 2022 road cycling calendar.

Tour of Britain organisers SweetSpot and the Isle of Wight Council are also jointly exploring other opportunities in cycling for 2021 as a build up to September 2020 when the island will become the focus of the cycling world during the final stage of the Tour of Britain.

The Great Tour, a 64-day ride around the coastline of Britain is due to finish back in Ryde on Saturday 5 September, having completed an anti-clockwise loop of the English, Scottish and Welsh coasts to raise money for a variety of health charities. SweetSpot Group Managing Director Hugh Roberts is one of two cyclists aiming to complete the entire 6,700 kilometre route.


With its mix of stunning landscapes and gruelling terrain, Councillor Wayne Whittle, Cabinet member for regeneration and business development, said the Island would provide a spectacular finale to The Tour of Britain, saying “The Tour Series was a huge success when it came to Ryde four years ago and the Tour of Britain promises to be even bigger and involve the whole Island.

“Estimates from other councils staging similar stages have shown up to a 40 per cent increase in visitor numbers and a £4 million economic boost to their local economy.

“Add to this the legacy of support for our Island’s cycling ambitions and it really is good news at a time we need it most.”

Following the postponement of this September’s Tour of Britain, the next edition of the Tour of Britain be in September 2021, starting in Penzance, Cornwall on Sunday 5 September and finishing in Aberdeen on Sunday 12 September. Full details of the 2021 race route will be announced in the autumn.

The Tour of Britain is British Cycling’s premier road cycling event, giving cycling fans the opportunity to see the world’s best teams and riders competing on their doorstep and helping to build a great cycling nation.

on July 04, 2020
Email ThisBlogThis!Share to TwitterShare to FacebookShare to Pinterest