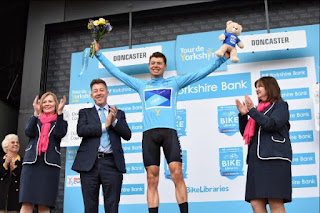 Photo: Hugh McManus
Canyon Eisberg talent Harry Tanfield has signed for World Tour outfit Team KATUSHA ALPECIN, who look forward to working with the young British cyclist over the next two years.
The 23-year-old, from Great Ayton in North Yorkshire, will step up from UCI Continental level to the World Tour in the 2019 cycling season.
Tanfield, who wore the Tour de Yorkshire leader’s jersey this season after winning the race’s opening stage into Doncaster, is still pinching himself.

Harry Tanfield said: “The World Tour has always been the ultimate ambition. I have a foot in the door now and have two years to prove myself.
“I don’t pretend to think I have made it. The hard work starts now and the challenge is for me to show I can progress as a rider.”

Tanfield specialises in one-day races as well as individual time trials and recently finished second behind Geraint Thomas in the national championships (ITT).
Earlier results this season include that stage win in the Tour de Yorkshire as well as second-place finishes in Midden-Brabant Poort Omloop and Ronde van Overijssel, both 1.2-rated one-day races.
General manager José Azevedo will officially welcome Tanfield on board his KATUSHA ALPECIN squad on January 1, when the Yorkshireman will line-up alongside fellow Brit Alex Dowsett.

José Azevedo said: “We’ve been watching Harry with our partner Canyon for a while. He’s not only a talented time trial rider but we have seen on this year’s Tour de Yorkshire he has all the skills to win big races.
“While this is a big step for him now, we as a team will provide him with the best possible support to continue his positive development.”

Canyon Eisberg sports director Tim Elverson has spoken of his pride at Tanfield’s elevation to cycling’s top tier.
He sees it as another feather in the cap of his British UCI Continental outfit, who are busy preparing for next
month’s Tour of Britain.

Tim Elverson said: “I’m super happy. It is great Harry’s work has been recognised because he really does deserve it.
“It underlines Canyon’s commitment to our relationship and also shows we are operating at a level where we can deliver someone to the World Tour.
“KATUSHA ALPECIN are getting a very strong, young rider. Hopefully they can help him progress to the next stage and that is to be a reliable World Tour rider.
“I have no doubt that is what Harry will become. And from everyone at Canyon Eisberg, we wish him the very best of luck.”

Harry Tanfield added: “I wanted to honour the faith Canyon has put in me through Tim (Elverson) and Nick Allen (Canyon UK), so joining KATUSHA ALPECIN was always the dream.
“I had just set out on a training ride when José (Azevedo) rang me. I was over the moon. Now I just can’t wait to get started.
“I have to thank everyone at Canyon Eisberg but especially Tim. We’ve worked together for three years and it has been a great ride.”

on August 23, 2018
Email ThisBlogThis!Share to TwitterShare to FacebookShare to Pinterest