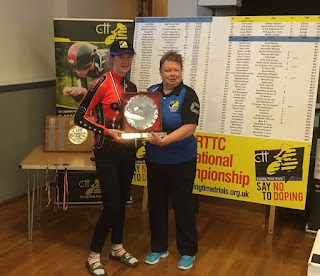 "The course was more windy than I was expecting but luckily the rain held off. I could see my minute man for the majority of the ride and managed to catch her after 6 miles. The drag after the roundabout was hard as you were already in the red and were now facing the wind. With about a mile and a half to go I gave it everything all the way to the finish. I felt good,comfortable during the ride but wasn't sure that I'd won it. To find out I had was a massive relief and it's a great birthday present!!! Up until now I've had 4 over all 2nd places but to take the top spot this time felt awesome!"