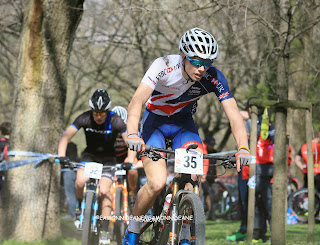 Evie Richards, Ella Conolly and Frazer Clacherty,(pictured) all of whom contested the first round of the series in Nové Město, Czech Republic over the weekend, will be back in action in Germany for the second round. Evie Richards recovered from a crash to finish in second place in the under-23 women’s race, whilst Frazer Clacherty recorded a career-best result by finishing in 40th place in the under-23 men’s event. Ella Conolly was forced to retire from the race with illness but is hoping to recover in time for the weekend.

Simon Watts, British Cycling’s lead mountain bike coach said: “Evie and Frazer performed well in the first round of the series and I’m looking for the riders to build on this in Albstadt. The course in Albstadt offers different challenges to the one in Nové Město – it’s very physically challenging thanks to two extremely steep climbs and there are fewer technical features to contend with, which will suit both Evie and Frazer.

“It was unfortunate that Ella became ill over the weekend, however we are hopeful she will be able to compete this weekend and we will make a final decision over the next few days.”

Frazer Clacherty
Ella Conolly
Evie Richards
on May 24, 2017
Email ThisBlogThis!Share to TwitterShare to FacebookShare to Pinterest