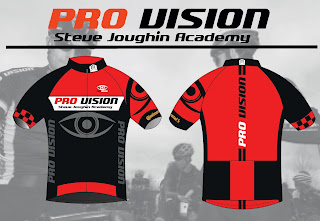 The brainchild of former two time National Pro road champion and international Steve Joughin, a new junior team will be taking to UK and European roads this season.
The Pro Vision Steve Joughin Academy is based on a strong youth culture with the aim of helping the four riders realise their dreams and prepare them for their hopefully successful journey through their cycling life backed up by his successful cycle clothing business, Pro Vision.
None of the riders is yet a household name, all under 18, Ryan Coulton, Owen Lines, Morgan Hughes and Tomos Owens will be targeting the National Junior Series and home, the Junior Tour of Ireland and single day and stage races in Holland and Belgium, hoping they can change that.
“ With their collective abilities there is enough strength in depth to make an impression on this year’s racing scene,” according to Steve whose business is based in Stoke on Trent already has the backing of Continental tyres, O.T. E nutritional produects and KMC chains.
The management of the riders at races will be overseen by Peter Kay from Middlewich who Steve first met when he was a soigneur with the Percy Bilton pro team. Peter has been taking young riders abroad for the past ten years starting with Ian Stannard and Adam Blythe. More recently he has helped the likes of Richard Handley, Hugh Carthy and Mike Cuming all former JLT Condor riders.
Morgan, 17, is a second year junior who came into the sport at an early age cycling with his father and on club runs . Last season he rode with the Welsh National squad in the Cadence Junior race, Rs de Cymru and the junior Tour of Ireland. This year, as a good all rounder, he is looking for strong performances in the junior series, his eventual goal being a professional contract.
Owen,17, is also a second year junior rode for Steve’s Pro Vision club last year where he showed a real improvement with good finishes in the junior tours of Ireland, Holland and America. He is seen as a good sprinter with a professional contract also his goal.
Ryan,17, was a swimmer who came into cycling in 2013 riding local time trials and road races in his native Lancashire. He is a strong time triallist who can climb. This year he is looking forward to gaining valuable European experience with Peter.
Tomos, 16, is a first year junior but has been cycling for eight years already. Joining the academy is a natural progression. His year started with a track selection for Wales in Alkmaar, Holland. He is expected to see an overall improvement in all departments of the sport. He sees himself as a good all rounder with a sprint with an enviable long term goal of winning the Tour of Flanders.
Their UK programme:
Cadence RR
Mendips 2 Day
Cicle Classic
I.O.M
Spokes 2 day
Loughborough RR
Hatherleigh RR
Bath RR
Scarborough RR
Junior 3 day Tour of Wales
Their season is likely to begin with the Clayton Velo Handicap, the Mining Valleys in Wales and Holme Valley 2 day and a Belgium trip at Easter.
Steve said:” I know from experience that the hardest part of making your way in cycling is funding so I am really pleased to help[ young riders make their way in the cycling world. They are all promising lads. If we can help them fulfil their ambitions we will be happy.
“ I have been keen for sometime to put something back into the sport and so when Peter approached me I saw this as an opportunity. I got to know him when I was racing and he was one of the best soigneurs I ever had.
‘He is dedicated to the sport and has been helping youngsters for years all out of his own pocket he has great contacts in Belgium and Holland so these lads will be safe in his hands. You only have to look at the youngsters he has helped over the years back to Stannard and Blythe.”
Peter said:” I think the academy is really exciting and with not having to fund the trips myself, we can do a lot more. I love working with these youngsters and watching them develop and make their way in cycling. After all this time I have plenty of contacts abroad.It is great that Steve wants to help these youngsters. “ 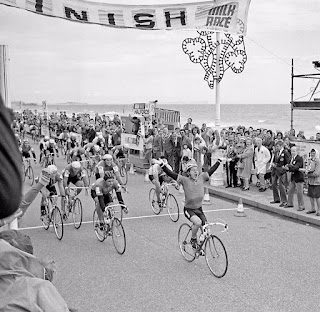 on January 28, 2016
Email ThisBlogThis!Share to TwitterShare to FacebookShare to Pinterest