In need of Inspiration?This Girl Can in Afghanistan! 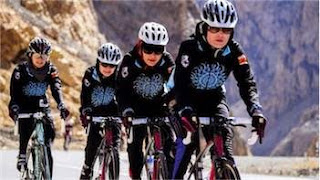 In a country where women riding bikes are considered provocative and immoral, a national women’s team is gradually changing attitudes.
“Riding a bike is the most deep-seated taboo left in Afghanistan,” says Shannon Galpin founder of the nonprofit Mountain2Mountain dedicated to working with women and girls in conflict zones. “There are more women running for politics than riding bikes.”

Galpin is a Colorado-based American who travels to Afghanistan an average of three times a year to support and train with this handful of Kabul-based young women on the Afghan nation team. Despite bystanders hurling abuse and even throwing rocks, the girls have stood firm and continued to ride.

Using the bike to create change

Says Galpin: “They are not doing it to be revolutionary. They are riding a bike because they believe they have the right to. Why should a boy ride his bike to school in 15 minutes while the girls need one hour to walk there?

“These girls are not just racers, it’s not about competing, it’s about how do you use the bike to create change. Through the sport of cycling, these girls are going to normalise bikes for the rest of the country, enabling young girls to go to school on bikes and midwives to use bikes to access rural communities. Bikes literally can change lives.”

A single track mountain biker, Shannon Galpin was the first woman to mountain bike in Afghanistan in 2009. In 2010 she became the first person to cross the Panjshir Valley by bike. She had never seen another woman on a bike in the country until 2012 when she heard about the national team in Kabul.

These eight young athletes are fortunate to have the support of a (male) coach and their forward-thinking families. In some cases the fathers or brothers even ride with their family’s female athlete. “By doing this they are giving their stamp of approval,” marvels Galpin. “They are as much the heroes as the girls.”

She points out that much of the resistance comes not only from the men, but also the girls’ mothers, anxious to preserve their daughters’ honour. Some of those mothers have now admitted that they always dreamed of riding a bike when they were younger.

While high-level racing is not one of Shannon Galpin’s preoccupations, she says it can play a major role in encouraging acceptance of the sport for women.

“Things are evolving and people have seen the sport on Afghan TV. Two girls raced as the Asian Championships in Kazakhstan in 2014. The fact that they are riding can normalise bikes and the acceptance that it is not obscene.”

She would dearly like to enable at least some of the team to go to Rio next year to watch the Olympic cycling events, with a longer term goal of participation in 2020: “If we could even get one girl to Tokyo, flying the flag for Afghanistan….”

We are talking about a country where all women’s sport is fragile – the national women’s cricket team was recently disbanded – but Shannon Galpin is optimistic. As well as the team of six to eight women in Kabul, groups of women cyclists are starting up in other regions.

Their story on film

Liv, the cycling brand dedicated to women, has come on board with donations of bikes and equipment, and there is also strong support from Afghanistan’s National Olympic Committee.

“The work we are doing is insanely inspiring,” says Galpin, who has produced a feature length documentary “Afghan Cycles” due to be released in 2016. The documentary traces the story of these brave girls and their delight at having the chance to ride.

One of them tells the camera: “I am very proud of myself that I’m a cyclist.”

Her teammate adds: “They tell us that this is not our right to ride a bike in the streets and such. We tell them that this is our right and that they are taking our right away. Then we speed off.”

Making it Happen.
Source AIPS
(This article was first publised on www.UCI.ch)
on March 11, 2015
Email ThisBlogThis!Share to TwitterShare to FacebookShare to Pinterest