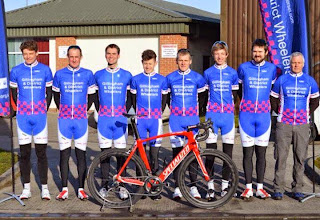 March saw the launch of the ambitious new Gillingham and District Wheelers – Wheels of Dorset Race Team. Affectionately known as #Project1 by the management, they have set a clear goal of developing local cycling talent from grass roots through to senior ranks. In 2013 Mark Geddes began the Club Youth training in association with British Cycling as part of the London Olympic Legacy programme. This has now evolved to support the developing riders in a senior racing environment. The team is competing in local Road Races, Time Trials and Criterium events at regional level for 2015 with a view to stepping up to National Level events for the 2016 season and beyond. Team manager Mark Geddes said “Without doubt the club is growing and evolving and this felt like a natural progression to retain the quality riders we've helped to develope.”
Anyone wishing to get involved with coaching or racing should contact Mark Geddes or Charles Rees at Wheels of Dorset Bike shop in Gillingham. More info on WEBSITE

on March 11, 2015
Email ThisBlogThis!Share to TwitterShare to FacebookShare to Pinterest