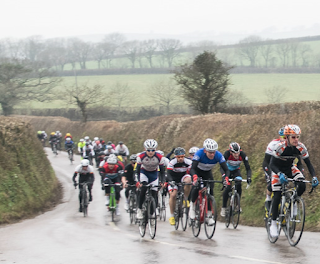 DHC mustered a 4 man team consisting of Dave Harding, Matthew Downie, Edward Rowe and Andy Mackay to compete in the Modbury Spring Road race in Devon. The team travelled down the day before in order to get a recce of the route under their belts, but only after an essential coffee stop of course! The course was excellent, starting Modbury Sports Pavilion straight in to a number of easy climbs followed by a very long and fast descent which led to two steep climbs back to the start, the race would be 3 laps/64.4KM.Unfortunately the race did not pan out too well for DHC! Dave was genuinely unwell and quite honestly did well to make it to the start, once the race was de-neutralised Dave dropped back quickly and abandoned, Chapeau for even starting in that state!
Next out was Matt with a puncture, only just out of the neutralised zone - an unfortunate and early end to Matt’s first road race. Not to worry, plenty more to come and we know he’s going to be fast!This left Ed and Andy in the mix, Ed found the pace a little too high on this occasion falling back from the peloton, with no hope of catching Ed pulled up at the end of lap 2 so he could watch the finish and cheer on what was left of the team.Andy stuck in with the main group for the first lap, knowing his climbing wasn’t fantastic he used the long descent to get to the front to minimise the damage of the 2 steep hills back to the start. This worked well, Andy was still with the pack at the start of lap 2, however soon after he ran out of puff on the hills that seemed so gentle on the recce and lost touch with the peloton (Some sort of excuse about the previous week hill training in Wales was mentioned – he’s always got an excuse!) Andy plodded on doggedly (stupidly?) to complete the race, taking strength from the odd straggler caught and abandoner passed. Despite finishing out of touch and on his own he was far from last and pleased to have completed the race. Thanks to Dave Harding 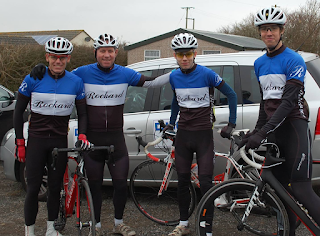 on March 31, 2015
Email ThisBlogThis!Share to TwitterShare to FacebookShare to Pinterest