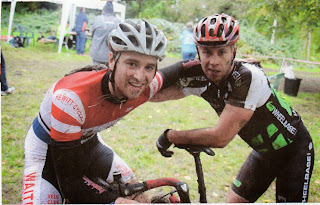 James Atherton (L) & Rich Phillips-Schofield
When last run in 2013, The Perfs Pedal Race included the James Atherton Award for best placed BC South Region 2nd Category Rider.
James died in January 2013 in an accident whilst out training in the New Forest. It was intended to keep this award going in Perfs this year (2014) with a Trophy. Jame's Family and Friends had raised the funding for this to happen but unfortunately this years race was cancelled due to flooding on the course.
In March 2014 James close friend and one of the fundraiser Rich Schofield died after a tragic accident while competing at the Mountbatten Circuit in Portsmouth.
For the 2015 Perfs the award will be renamed The James Atherton and Rich Schofield award, in memory of both these riders and will be awarded to the best placed BC South Region 2nd Category Rider.

The traditional domestic road-season opener in the South started way back in July 1964, moving to its early season slot the following year. Promoted by Mick Waite on behalf of VC ST Raphael, Perfs has always proved a tough early season test, the vagaries of the winter weather as much as the course, providing the examination. The 2014 edition of Perfs was cancelled due to flooding, Perfs was also cancelled in 2003 due to flooding and again in 2010 this time due to poor road surfaces. The 45 mile, 2015 race takes place on Sunday 8th February and will feature 4 laps of the Portsdown Hill circuit above Portsmouth before switching to the Newtown Circuit, the finish coming on the second climb of One Hundred Acres Road. Perfs is open to elite, 1st, 2nd & 3rd category riders and features National Escort Group accredited motorcycle marshals and accredited road marshals.
Postal Entry only to:
Mr Michael Waite
249 Havant Road
Farlington
Portsmouth
Hampshire
PO6 1DB
02392379753
£30.00 payable to M WAITE

on November 17, 2014
Email ThisBlogThis!Share to TwitterShare to FacebookShare to Pinterest