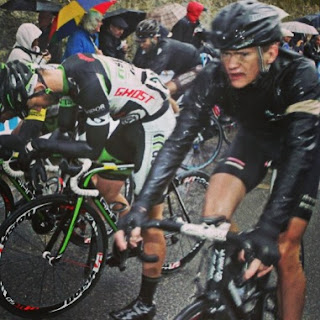 Will Stephenson (Rapha-Condor JLT) relives The Tour Du Loir- et- Cher, his first international race as a senior. Will was back at school on Monday,rode the mountbatten circuits on Wednesday and this weekend is riding the Rutland-Melton Cicle Classic working for team leader,Ed Clancy.
“On the first day we had 200km. It was my first time riding in a big group of 170 riders for a while and I think I needed some getting used to it. On the first day everyone is on the same time so everyone thinks they're in with a shot at winning so everyone wants to be at the front. Everyone fights for every inch and it's quite aggressive. As the days go on more and more people have lost time so less and less people are concerned about being at the front and it relaxes a bit. Only 8km into the first day I managed to get caught up in a crash. My bike was tangled with someone else's, who panicked and tried ripping them apart, which just made it take longer.
When I'd got going again, there had been another crash about 200m further on. This meant none of the cars could get through for quite a while so there was no convoy behind the race making chasing back on impossible. We had to wait for the cars to come back up to us. I got behind are team car and we were doing 40mph to catch back on. As we could see the peloton just up the road we went round an open corner and I was bounced off the saddle onto the top tube, I slid off and hit the curb, I had a bike change and after a big effort behind cars managed to get back on. The crashes had caused some swelling in my back which meant I could only breathe shallowly. I was unlucky to get caught up in a crash with 4km to go midway through the bunch. I needed a wheel change but by that point there was no chance of chasing back on. I lost 4 and a half mins that day but my team mates all finished same time. 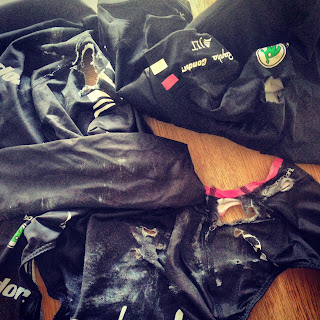 The next day was over 200km as well. It was one of this days where it just poured with rain. For the entire race. It was grim. I managed to stay upright though which I took as a big success and just finished with the bunch in 80th despite a hilly few finishing laps.
Stage 3 was the longest at 230km. It was a lot windier that day and the crosswinds split it to pieces right from the start. The first 2 hours were just flat out in gutters and we covered 100km before the chance to sit up and take on board food. I was thinking to myself 'how long can this go on for?! We've still got over 150km to go and I'm having to sprint to keep up!' Thankfully the break went with 2 of our team mates in it so the pace eased slightly. They Felix managed to get 4th on the stage with Kristian in 6th. I managed to finish mid bunch in around 50th. My team mate Ed Clancy suffered a bit in the cross winds and had to pull out with a load of other teams. 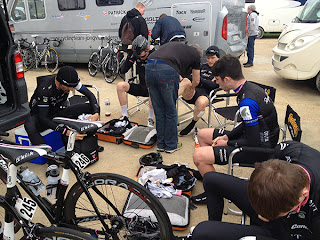 Stage 4 was the most rolling of the race with nothing really steep but you wouldn't call it easy. There was no neutralised and it was pretty hard straight away. After an hour or so my legs loosened up and felt surprisingly alright after the previous days. More and more people slowly got dropped and a few times I was fighting over the top of hills to keep contact. The 10km finishing circuit again was pretty hilly and we had 4 laps to do. The group slowly whittled down, but come the last lap it was me who was sprinting to keep contact at the back. At one point I lost contact by a few metres but managed to make it up in a corner and rejoin. In the run in to the line there was a big crash at 300m to go which means I had to break hard. Kristian was 12th and kept 5th overall. I managed to finish 24th which I was pleased with. 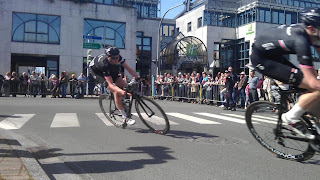 The next day was 30 degrees and sunny. It was only 100km today with 14 laps of the Blois town centre which included a 1 mile climb up to the finish. It was good to be able to work with the guys doing through and off on the front for Kristian. It felt cool to be on the front doing 60kph for a few minutes in front of the crowd, mouth open and pulling a face like on the TV. My team mates and I pulled off with half a lap to go, job done and pleased. Legs were tired but I felt I could have handled a few more days.
It was a great experience and I can't wait for the next big race! Hopefully the weather's a bit better though. 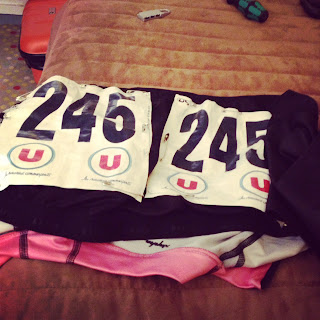 on April 19, 2013
Email ThisBlogThis!Share to TwitterShare to FacebookShare to Pinterest