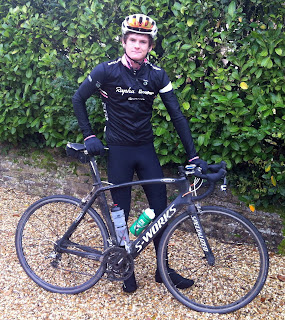 Will Stephenson (Rapha Condor JLT) finished 51st at the Tour du Loir et Cher in France. The 2.2 UCI stage race was a big step up for the first year senior who aquitted himself well,finishing just 10 minutes down on eventual winner Tino Thomel(Team NSP-Ghost) Team manager John Herety was very impressed by the performances of the whole team throughout the week, citing the ride by the 18 year old as highly encouraging. “Will Stephenson in particular rode very well. It was his first international race as a senior and he was one of the riders who didn’t come out to Australia, so to see how hard he has worked to be in such good shape is very encouraging for me.” said Herety . Team leader Kristian House scored an excellent 5th place overall in the five day race After two wet, crash marred stages that both finished in bunch sprints, House, as well as Felix English, made the twelve-man selection on a tough windy third stage that decided the overall of the five-day race. House explained, “The first day was pandemonium, with crashes all over the place. I think our guys were involved in 8 crashes that day.”
The team travels to Johannesburg for the five-day Mzanzi Tour in the Gauteng province that starts this Wednesday. Stephenson will not travel to South Africa with the team as he explained on Twitter “Back in England now and back to the reality of school, homework and revision. Living life for the next race!
Thanks to VELOUK
Photo Richard Stephenson
on April 15, 2013
Email ThisBlogThis!Share to TwitterShare to FacebookShare to Pinterest