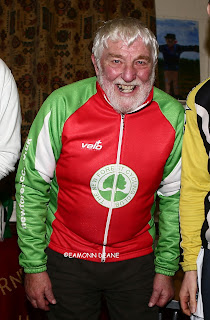 New Forest CC club president Roger Bacon sadly died yesterday at the Bournemouth Hospital after a brief but courageous fight against cancer.
He had been ill since late July and after medical investigations at Southampton General Hospital, was diagnosed with leukaemia. Later the cancer spread to his lungs and brain.
He died at 9.50am yesterday, Sunday, December 1, just short of his 80th birthday on Christmas Eve.
More recently noted as the organiser of New Forest CC's Boxing Day 10, Roger had, in the past, been a top level cyclo cross rider, enthusiastic time triallist, keen Audax rider, staged cyclo cross races, organised many club tours and was the club's time trial secretary.
He was a regular with the stopwatch at time trials throughout the area.
Despite his illness, he organised this year's club Christmas Lunch, which will still take place this coming Sunday (December 8) in Burley.
Until he suffered balance issues almost two years ago, he had been a regular at the Scrumpy Wheelers' Wednesday lunch meets in both Bournemouth and Southampton areas.
He was also a keen ornithologist and was a member of the Hampshire Ornithological Society.
He leaves his wife Rosemary, two daughters Jenny and Karen and a grandson, Cameron. Roger's funeral will take place at Test Valley Crematorium, Romsey, SO51 6AA from 12.15pm on Thursday, December 19 followed by a wake at The White Horse, Romsey. His daughter Karen would like to know how many people to expect at the wake. If you wish to attend, please contact her at kelee25@btinternet.com.

Martin Balk: Will be missed by so many. Roger RIP
Maria Golden: We will have to ride the Boxing Day 10 now in his memory Come on guys let’s make it the best event ever x

Matt Parton: Very sad news. A true cycling legend and a super guy. First met him at my very first NFCC club 10 on the Hatchets Pond course in 1984. He will be sadly missed. RIP Roger 😢

Peter Pickers: So sad news he was a great guy

Alan Brimecombe: A sad loss, Roger was a great character, I will remember him with great affection.

Bovington Road Master: Only thinking about Roger in the last few weeks... So sad to hear the news... He will be greatly missed....

Ros Spencer: He was one of life's givers and will.be greatly missed.

Roger Papp: Very sorry to read this. Roger was a great character in our sport. Condolences to his family on their loss

Paul Rogers: Sad news,Roger was a great guy amd will be missed by many RIP Roger

Paul Sloper: Very sad to read roger was a true character of the cycling world RIP roger condolences to family and friends

Penny Cossburn: RIP Roger - I have some lovely memories of him including being lost in France when using his 20 year old map with a large hole where he thought we were, eating large quantities of cake and his dodgy judgment when it came to hotels! We will miss him very much.
Karen Lee: Penny Cossburn that made me laugh. Dad would never book anywhere to stay in advance and we ended up staying in a very dodgy hotel in Belgium many many years ago because he wouldn't pay the equivalent of £12 a night in a decent hotel. He always has been a bit tight with his money! But never when it came to buying cakes in the cake shop. Dearest dearest Dad, we're going to miss him.

Jacky Prosser: RIP Roger, he will be greatly missed as he did so much for the sport. Our thoughts are with his family at this sad time.

John Noble: Deeply sorry to hear this, he was a good friend of mine R.I.P Roger

Patrick Lockyer: Really sad news. Remember well Roger being so helpful and encouraging at my early attempts in Southampton cx races during the very early 70s. Heart felt condolences to all

Alan McRae: For over 40 years, Roger was a member of local Cycling Club Royalty, working tirelessly for others within and outside his own Club while putting a smile on the face of everyone he encountered, I consider it a privilege to have known him.
Martyn Dymond so sad to hear.he got me into this cyclocross lark .tales at the new forest cc club nights at tiptoe church hall

Andrew Macdonald: Very sad news and a great loss to the club and the local cycling community.
Cyclo cross lost another local hero who built the Wessex league up to what it is today.

Rachel Hodges Such sad news. Roger was such a local sport hero. I recall him running such brilliant events in my youth. He will be truly missed. 🚲🚲🚲

Tony Parker: He was a true gent and the true grin from him when the conditions at crow were the most challenging I will always remember :)

Lee Smith Such sad news , always enjoyed the crow races as a under 16! Thoughts to his family .

Robin Wilmott: NFCC was my first club, and Roger was the most encouraging, knowledgable, jovial, mischievous and hardy rider. He influenced every branch of the sport within the club and beyond as organiser, competitor and helper, and I owe some of my love of ‘cross to him.My first race was his ‘cross at Longslade Bottom, and he drove me to my second Three Peaks race, supporting me through it and my first 12hr TT too.
The tours to see the Ghent Six were truly memorable as well, especially one when, with two hours to spare, we stopped 9km from the return ferry at Dunkirk. After a 30 minute hot chocolate stop, we emerged in to a snowy whiteout! Of the five of us, three crashed 11 times on the now icy roads, but Roger and I kept it upright. Of course, we missed the ferry...
Such a gentleman and an amazing source of amusing stories, I only wish I’d seen him more recently. Ride In Peace Roger.


Catherine Pascoe: Roger sometimes reminded me that he had managed to stay on his bike while the rest of us went down like dominos every few minutes on that ride back from Ghent! More recently, he would ask me what good birds I'd seen - and tell me where he'd been chasing round the country to see some rarity - just as I was poised to start a time trial, and he would forget that he was supposed to be counting me down! He was well up on his target for his 200 bird list for the year, which was an annual aim in recent years.

Jamie Pope: Sad to hear the passing of a real character and catalyst of so many adventures in my youth. My first ever trip 'abroad' in the 70s was to enjoy the Ghent 6, and 1 or 2 belgian beers! The return ferry crossing was so rough the trucks broke their holding chains, but much to Rogers relief the van and bikes were untouched. Good times. May the wind be always at your back where ever you ride.

Norm Gray: RIP Roger, you will be sadly missed .
Your contributions to cycling are much appreciated
Stuart Bowers Sad news indeed. 😔

Kerie Wallace: A life lived to the full. Roger supported all aspects of cycling and really encouraged young riders to get the best out of themselves and cycling. Roger was an organiser par excellence; time trials, cyclo cross, touring trips, cycling socials, he did it all. Along with Gordon Macdonald and Geoff Greenfield, Roger was chairman, they formed the Wessex League, under the stewardship of the BCCA, and started what we have today. May he cycle for ever. 🚴🚵

Andrew Macdonald: Well said Kerie, a lot of the people riding today don't realise how much work they all put into the Wessex league we have today, along Geoff Shergold, Paul Coates and Sid Rooker

Gary Allan: Very sad to hear of Rogers passing ' A great guy and proper cycling clubman , I rode many TTs and Cyclo crosses From the early 80s where He was either timekeeper or lap scorer ' He kept the local club scene alive ,I will miss his trips to the shop for Campagnolo for his lovely Mercian Cycles .
RIP Roger

on December 02, 2019
Email ThisBlogThis!Share to TwitterShare to FacebookShare to Pinterest