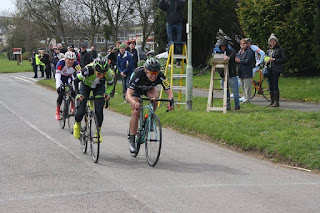 Cockcroft Wins the Sprint PHOTO by kind permission "On Tor"

'Tough conditions today, with very strong winds, made judgement of effort vital. Cresting the last uphill drag to the fast downhill finish, Emma went for a long-one and held on, an excellent and very determined win; credit to teammates Jess, Bethan and Alex, can't do this without help.'... David Walter Team Manager Bikeshed-Bianchi 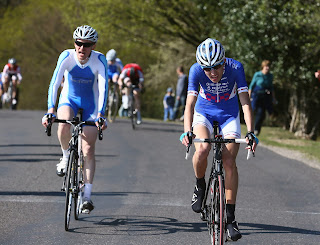 “With the weather looking better than promised, a full field of riders turned out for today’s event. From the beginning attacks were frequent, with at least 20 riders trying to get away at some point. With the climb tough and the decent technical, the only flats were met with a strong headwind, making it very hard for any attacks to stay away. However, despite this the pace remained high, especially over the top of the 11km uphill drag.
Taking advantage of a lull in the pace, Southampton University’s Andrew Lockwood jumped at the base of the main climb, quickly opening a sizeable gap whilst the chasing group were reluctant to attempt to close the gap. Towards the end of the penultimate lap, Lockwood came back in sight of the peloton, who had now closed the gap to roughly 300 metres.
With Lockwood in sight, James Hywel-Davies of Gillingham and District Wheelers made a last bid for the win with 11 miles to go. Hywel-Davies caught the university man half way up the climb, where they continued to work together. However, the pair got split up just 2 miles from the line shortly turning into a strong wind, which was gusting up to 35 mph. The peloton were now rapidly closing on the 2 escapees, but it was too little too late as the pair were now battling up the punishingly steep final climb. Hywel-Davies swung into the final bend to take the win by roughly 50 metres over Andrew Lockwood, who was closely followed by a hotly contested sprint finish.”

Thanks to David Walters & James Hywel-Davies

on April 10, 2016
Email ThisBlogThis!Share to TwitterShare to FacebookShare to Pinterest