Settling in and Looking On: Dave Rayner Funded Jack Billyard Faces the Challenge!

Settling In and Looking On,Dave Rayner funded Jack Billyard, based in Portugal with Zappi's Pro Cycling, reflects on life as a full time rider.

The assimilation of reality was inevitable really. No sooner had the ecstasy of warm weather and mountainous terrain worn off, did the inescapably tough day to day routine set in; and it took me by surprise.
For me, signing for Zappi’s U23 and moving abroad was no jump into the fog. It was simply the next logical step in my progression towards the ultimate aim of turning pro. And who could argue that thought process? The unique calendar Flavio Zappi (team owner and manager) provides us with is extraordinary for a non-UCI team and is certainly admired. We’re based outside of the UK; in Portugal and then Italy, training in the warm and the dry for 9 months of the year racing a fine selection of hilly and mountainous races. For a rider of my ability (a tall, lanky climber) and with a gap year to fill, it was a no brainer when I was offered the position on the team. But this massive change in lifestyle has been individually challenging.
The morning starts at 7:30 with a 30 to 45 minute walk around Tavira (our home town here in Portugal) to wake us up ready for the day. After breakfast we clean the bikes and get out from anywhere between two and six hours in the saddle. Lunch is the same every day; a mixed salad of beetroot, carrots, rocket, spinach, cucumber, chopped apple and beans with either fish or tofu on the side. In the afternoon, various activities fill the time from walking on the beach for a few hours, to swimming and yoga. Dinner, as cooked by us, is between 7 and 8 which precedes a bit of free time before bed at 10. Although this might sound ideal to the young cyclist who is still at school or in full time work, it is deceptively challenging. 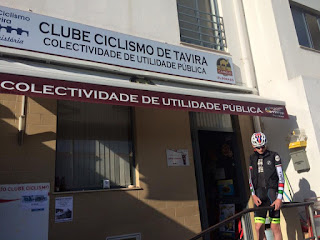 Waiting at the cafe for the local chaingang!

Personally, the biggest changes for me have been the diet and the afternoon training. Yet, as a result of these two aspects especially, I know I am becoming a stronger and more rounded, resilient person as a whole. I came into this season with the sole aim of advancing my career and improving my ability as a cyclist, but only now am I realising that life in Casa Zappi teaches a whole host of essential skills that will no doubt prove vital further down the line; wherever life takes me. The personal difficulties I have faced so far have been onerous, but certainly necessary for me to develop and grow as a young adult. Of course, there’s the second half of this – and that’s my progression and as a cyclist. I have thoroughly surprised even myself with how far I’ve come since January 1st and it’s this measurable improvement that motivates me more than anything else.
The racing season has already begun for us too, and we’re going to be racing every weekend until we return home in mid March before the move to Italy for the rest of the year. The first two rounds of the Copa Espana have been mixed, with both good results and crashes for a few members of the team including myself. With Brendan Cole out with a fractured elbow and Louis Modell with a sprained wrist, we barely have enough riders to sign on. The remaining races this side of our return to the UK are in Portugal culminating with Trofeo Al Pendre (a UCI 2.2 stage race) on the 12th and 13th of March. 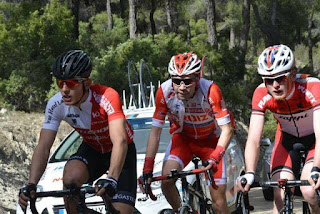 Billyard,right,racing in Murcia
The whole team is motivated to perform to the best of their abilities and I know, for a fact that, I will be ready to give 100% in everything I do for the rest of the year; whether it’s doing a ‘full gas’ effort on a climb in training, getting bottles from the car to redistribute to the team in a race, or cooking rice for the team in the evening. My hope for the rest of the year is not that day to day life becomes easier, but rather that I have the strength to tolerate life being tougher.

on March 01, 2016
Email ThisBlogThis!Share to TwitterShare to FacebookShare to Pinterest