Primera-TeamJobs Look to the Future.

On the eve of the official team launch we sat down for coffee and a chat with team Rider/Manager, Jay Eastwood & Primera boss, Bill Temple. The addition of local Dorset business, TeamJobs, as title sponsor, has enabled the squad to expand and look forward with a degree of permanency. Specialized have provided team bikes, Helmets & Shoes, Santini the kit, Salice sunglasses and with further support from Breeze Volkswagen, Primera-TeamJobs are optimistic for the future. 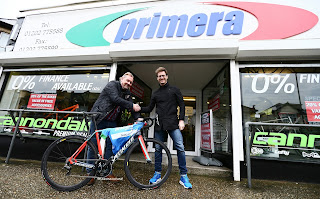 Bill Temple
“Primera from the early days with John Marshman helped out the likes of Daniel Lloyd, Mike Cotty, Barney Storey and later on Will Stephenson, we want to continue with that, helping out local riders, and with the extra sponsorship coming from Team Jobs & Breeze Volkswagen we can increase the team and offer more support.”
Team manager Jay Eastwood will have a quiet start to his season, a baby boy is due in April but he has been busy with the squads programme
“The Regional Road champs are obviously on our calendar with Calum (Croft), Oscar (Hutchings) a good strong pairing. You don’t give Calum a plan, you plan around Calum, he likes to ride spontaneously and aggressively, we also have Alex Hart, a bit of an underdog in my opinion, he has only been cycling for a couple of years and not really constructively, this past winter he has really concentrated and put the effort in, over the next couple of years I think he could be pretty good. Alex has a good race head, the maturity to develop and become a really good cyclist. He is going to be a good road rider. (Hart won his first race of the season at Exeter last weekend) The regional circuit chapionships at Winchester, Calum likes Bristol City Centre crit so we want to support him there, all the usual local stuff of course, the racing at Henstridge is on the calendar for some of the team, the circuit series and the road race and we are looking at the National Team Time Trial in Devon in June.” 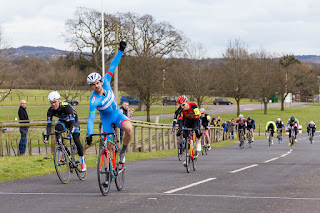 Calum Croft winning for PrimeraTeamJobs at Westpoint in Devon, a good start to the 2016 season

BT “We also have two really good junior mountain bikers, Josh Hooper & Sam Shephard doing really well, Dave Pewsey riding off road stage races, on the triathlon side we have Ben Keightley & Will Newbury and of course Paul Jones who will be focussing solely on Time Trials.”
Eastwood is not a coach, he sees himself more of a mentor, organiser and more and more a manager.
“The team has grown this year, we have double the riders we have ever had, especially new riders, junior riders, there is a lot going on, first and foremost comes welfare, supervising those sort of things, then obviously keeping the sponsors happy.”
BT “A training camp is planned for next year. We are looking at a junior team for next year, we get juniors approach us now and we hope to develop a junior squad alongside the senior squad and we also want to grow a ladies squad, We are looking for someone to support Ellie (Gilham) and build the ladies squad, There are some good ladies locally that we would like on-board, of course all this depends on continued sponsorship.”
JE “we have had some real success with our juniors, I am thinking of Will Stephenson & Mitch Webber, Mitch has gone on to bigger and better things. With the support from Primera, we can pass that on to the riders, it’s never forgotten, we still get calls from Will, I was chatting to Mitch the day before Perfs. If we can feature in some of those riders’ careers it’s very satisfying.”
BT “It’s like a leg up to the next team, expose them to the bigger teams”
Both Temple & Eastwood emphasise the focus on the youngsters, perhaps because Bills 16 yearold son, Tom, is on the team, we suggest a bit of favouritism
BT “We never have to push him He is very self-motivated, he just gets on with it, very, very keen to race and do well, he is getting stronger all the time and as I say we never have to push him”. 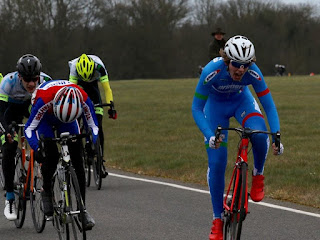 Two third places at Zappi's Circuits for Tom Temple already in 2016
JE “Tom has a good head on his shoulders, when he rides, trains, you can tell, he reminds me of Mitch, when you raced next to him you can see that racing instinct, that racing head, it was the same with Jon Dibben years ago, bags of talent, junior gears but he was closing down gaps of 30 metres on senior riders and going on to win, it’s that racing head again, I think Tom has quite a lot of that.”
But it’s not all about results explains Eastwood
“We want to build confidence in our youngsters, expose them to not just racing but different types of racing, not just the same race, Moreton is a great local race, good fun, it’s a hard ride but it’s not to be taken too seriously, it’s not that important. What I really want from the guys and I am trying to get through to Ed, all Ed thinks about is winning and the glory, I would rather see, especially at this point, see them riding, attacking, developing and being consistent throughout the season without a win.”
BT “The thing is with Ed is, he will have his own races, his own junior races, he definitely has some potential. He is young he will make mistakes.”
What about giving back to the local race scene?
JE “We want to support local racing, the Dorset League and the back-up they provide, I think next year when we have settled it would be quite nice to do something, regards promoting a race. Potentially a Ladies and junior race”
BT “It’s definitely on the cards”
What will constitute success for Primera-TeamJobs in 2016?
BT “A successful season? Just to see riders enjoying being part of a team, working for each other, the younger riders getting the experience to take them forward.” 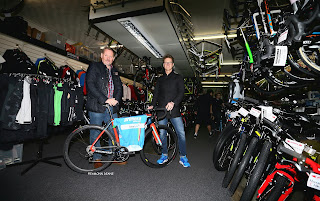 The Official Primera-TeamJobs team launch will take place at the Italian Villa, Compton Acres, Canford Cliffs on March 16th. Primera-Sport is 24 years strong this year with big plans for celebrating their 25th anniversary in 2017.


on March 14, 2016
Email ThisBlogThis!Share to TwitterShare to FacebookShare to Pinterest