Tour De France for Portsmouth in 2019? 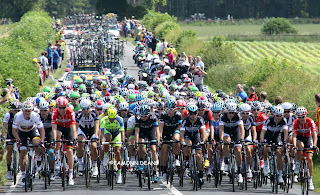 Portsmouth South MP Flick Drummond has thrown her weight behind the bid.
She said: ‘I will see what I can do to bring money in. The council is very strapped for money and this is a lot to be spending.
‘This is about continuing to promote Portsmouth as the place for major sporting attractions, like with Ben Ainslie Racing.
‘In Yorkshire, it brought in a lot of money and it would be a great achievement to have it here.
‘It would be great news for Portsmouth. I would love to see the riders cycle up Portsdown Hill – even though it would be tiny compared to what they normally do.’
Culture bosses say the bid ties in perfectly with plans for the D-Day Museum in Southsea to become a national centre of excellence in time for the 75th commemorations.
As reported, chancellor George Osborne has been called on to cough up the remaining £600,000 needed to help ensure plans to modernise the museum and upgrade all of its exhibits become a reality.
Jane Mee, Transforming the D-Day Museum project director, said: ‘This would be good news for the city and very welcome in the year in which we commemorate the 75th Anniversary of D-Day and the Normandy Landings.
‘It very much fits with our plans for the museum and our aim to make it the National D-Day hub with an international reputation.
‘I’m supportive of anything which highlights D-Day and encourages visitors to our museum – an event like this would be welcome.’
Portsmouth North MP and armed forces minister Penny Mordaunt said: ‘This is timely, given London has said it’s not worth their investment, which has opened the way for other cities like Portsmouth. And clearly with the historical connection with northern France, it helps us in terms of winning a bid.

‘We have that status and Portsmouth is not just like any other city – it’s a city with deep connections. It would be a fantastic attraction for tourists.
‘We know from the experience of Yorkshire that they got a massive return on their investment which they put in.
‘The businesses got a lot of extra footfall and exposure and if that’s the case for us, then that would be great.’
If successful, the 2019 Portsmouth event would follow on from other major events such as the America’s Cup World Series, which was held this summer and is coming back again in July next year.
Cycling groups have already said they would be ‘over the moon’ should Portsmouth be successful.

on October 04, 2015
Email ThisBlogThis!Share to TwitterShare to FacebookShare to Pinterest