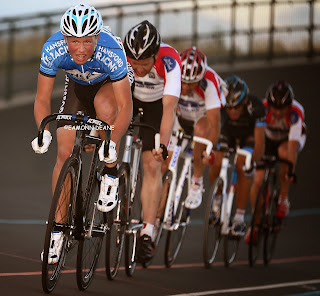 The inaugural meeting of the new Bournemouth Track league Association was held on Friday 15th November 2014 at Canford School. Adam D’Arcy-Wykes has taken over promotion of the league which will move to Friday evenings next season. Sixteen people, representing, Bournemouth Arrow, Poole Wheelers, Bournemouth Jubilee, VC ST Raphael, plus two unattached attended this first meeting. A nominal committee was elected to serve for twelve months, their first action being to drop the word “Association”. An open floor discussion then followed covering the good and not so good aspects of the last two seasons at the Bournemouth Cycling Centre. Broad agreement was reached concerning a later start time of 19:15, a coach led track warm-up, time keeper, PA system and hot coffee! Organisationally the last two seasons have been a success, the challenge remains the same, How to get more people racing? There are over 300 accredited riders at the BCC, yet the average league attendance is around 30! Wykes is keen for the league to be welcoming, friendly, approachable and open to all, equally it must retain its “raceface” and be a serious, competitive environment. A suggestion that the league adopt a similar constitution to the old Poole track league was popular:
Article 1. The league shall be known as the Bournemouth Track League
Article 2. The league shall have no other rules!
Keep red tape to a minimum, keep things simple, after all it is just bike racing and if it does not work this year it can be changed next year.
Officers Elected:
Chairman Eamonn Deane
Acting Secretary Gerrish Gray
Treasurer Les Pick
A permanent Secretary is required.

on November 17, 2013
Email ThisBlogThis!Share to TwitterShare to FacebookShare to Pinterest