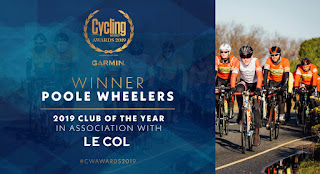 Poole Wheelers were awarded the Cycling Weekly Club of the year award in London last night.Club spokesman Graham Hurst said:
“It was on honour to receive the award on behalf of the club, in such prestigious company Roger Hammond, Sean Yates, Sean Kelly and Dani Rowe plus many more.” A dramatic increase to the female contingent in Poole Wheelers is just one of the reasons for their Club of the Year award, with 100 women riders now signed up, a third of the club.Their road race team has raced as far afield as Malta, while they have also put effort into their social media presence to increase their membership. 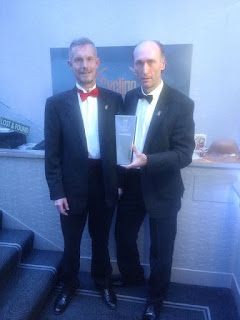 Graham Hurst & Craig Weston show off the Club of the year Award
on November 29, 2019
Email ThisBlogThis!Share to TwitterShare to FacebookShare to Pinterest