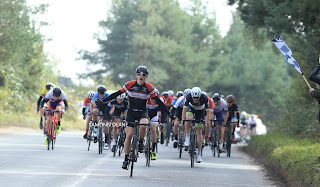 Toby Manning (Mud Sweat’n Gears) took his first road race win, sprinting to victory in the Portmore Classic at Bovington in Dorset. Anonymous for most of the 56 mile race on the Monkey World circuit, the 20 year old occasional triathlete from Weymouth hit the front when it mattered, relegating James Horton (VC St Raphael) and 21 year old, Rob Francis (Reflex Racing), from Somerset, to the minor placings. Instructed to “sit in the wheels and wait” by his coach and teammate, Darren Orchard, Manning did exactly as he was told, perhaps a little to well, admitting at the finish he had “no idea” 5 were up the road! (Something for Orchard to work on?) 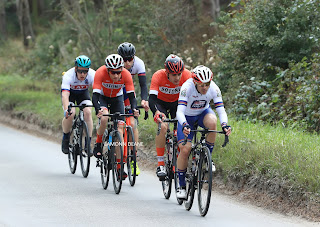 For his benefit as well as ours, Phill Wilks, Kouros Driscoll (Sotonia CC), Will Duffy, Martin Macdonald (Bath CC) & Robert Lewis (RN&RMCA) went away on the first of 5.5laps, pulling time out on the bunch along the fast road past the ape sanctuary that lends its name to the circuit. 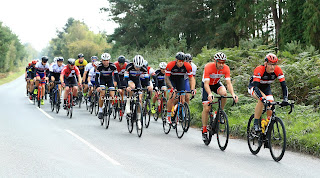 The bunch came to life on lap 4, quickly closing down the five breakaways, Paul Waite (Offcamber) took advantage of the inevitable lull, attacking through the finish line and opening up an impressive 35 second gap. Waite looked strong but the drag over Worgret Heath to the line started to hurt as Manning slipped up a gear for the predicted bunch kick that brought the curtain down on the road season in Dorset.
Toby Manning
“Yes it was pretty good, just sat in, did no work, the course is a bit dull, a bit like a Sunday ride, my coach (Darren) told me it would come down to a sprint, so I waited, I sat on Darren’s wheel and when James (Horton ) cam round Darren I used him as a lead out, my legs felt good at the end. To be honest I was unaware that the break was up the road, I had been told to sit in so that’s what I did” 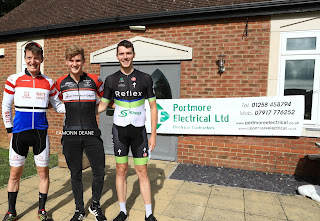 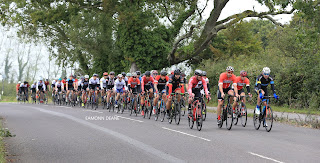 on October 05, 2019
Email ThisBlogThis!Share to TwitterShare to FacebookShare to Pinterest