Perfs Countdown: Who Will Win? We ask the Bunch 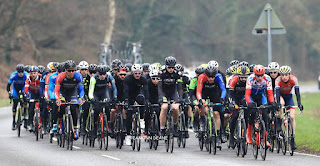 Following the release of the start list Alex Paton, Alex Richardson and Canyon DHB Bloor Homes seem to be everyone's favourites for victory at Perfs this weekend. The south coast pipe-opener offers a good indication of form but rather than listen to our opinion we asked the people who really know, We put one question to the Perfs Peloton (and a few others)
Who Will Win?

Michael Mottram Vitus Pro Cycling Brother UK "To be honest i dont have a clue. Could be any one. It is very early in the year and people have all had very diffrent off seasons."

Sam Culverwell Guernsey VC "I’d say good people to put your money on would be Alex Richardson and Marcin Bialoblocki, however both of their teams has strong elite/cat 1 riders. Also Michael Mottram is very strong so will be in the mix for sure"

Marcin Bialoblocki "Is very strong bunch in this year perfs and will be extremely hard race but Hopefully someone from my team Nopinz Latchem will gets top step on the podium.But is no stress,season is just beginning most important is to
race hard but safe and have good fun"

Jack English Guernsey VC "I would say it's Canyons race to lose, but we will also be following a number of individuals who we believe will be a threat. It's early season and for most riders it'll be the first real test. Should be interesting."

Frederik Scheske Vitus Pro Cycling Brother UK "There is a lot of unknown form, and i've not ridden course myself before, so would be hard pressed to pick out one rider. Sorry I can't give you a name"

Benjamin Marks PM "Well....I haven’t looked at the start sheet yet, but without much though I imagine one of big Tims Canyon kids will mop the floor so to speak. I’ll try and make up numbers on the podium."

Oscar Hutchings Team Tor 2000 Kalas "Can’t see past Marcin really, but will be giving it everything to beat him."

Zak Bridges Team Ribble "Expect the Canyon team to come to dominate like they have in the past few years but it looks like there's a few other strong teams in Nopinz Latchem, Vitus and Wales academy lads. Will be good to get the season underway."

Red Walters Vitus Pro Cycling Brother UK "Ooh that's a good one. Obviously I think I've got a good team, and I know Mikey is super strong. Also gotta be carefull of Gary chambers and Bialoblocki I reckon. And then obviusly canyon are gonna be the team to watch with a good 4 possible winners too"

George Skinner Primera-Teamjobs "I think Canyon DHB will be the team to beat. They look like they are putting good hours in in Spain and i guess they will be riding for Alex Paton, having won last year"

James Horton VC St Raphael "To be fair not really knowing all the riders, it will come from a break and i think it will be an outside odds rider"

Tom Day Giant CC Halo Films "Well I’d like to say myself (gotta be confident) but realistically I think Red Walters (from Vitus pro cycling) has a good chance as he is looking really strong this year."

George Smith Nopinz Latchem RT "Umm tricky one you’ve got the canyon boys plus our team which is strong this year so hard to call, along with the vitus team and a few others. Overall i reckon one from our team will get it so fingers crossed. See u there"

George Fowler Nopinz Latchem RT "Marcin my team mate of course, or me, 40 hour week in Calpe should see me well"

Chris Opie Perfs winner 2012,2017 "Thats a very good question. I would like to see a young up and coming rider win it again. Tim Elverson has his Canyon team there, I would like it to be on e of his second year U 23 riders. Charles or Louis, perhaps. However, for an actual prediction, I actually think it is a race that suits a rider with good experience."


Rob Atkins, Sports Reporter Portsmouth News
"if you want me to pick someone out, maybe Jacob Vaughan, if Tim sends him. Bags of talent, has form in the race and is determined to get back on track on his return to the domestic scene. It looks a strong field this year? No stroll for anyone. Be interesting to see how Alex Richardson goes. Rode it two years ago but stronger and wiser now. More than capable."

Tim Elverson DS Canyon DHB Bloor Homes "Difficult, I'd like to think us but a few good guys in there, Im racing it to be all about my young guys so one of them, we will have a few plans in place"

Mick Waite Race Patron " A tricky one but i am going for Jacob Vaughan."

Mick Metcalf Race Director
"One of these depending how their training has been going:
(Alex) Paton, (Jacob) Vaughan, (Marcin ) Bialoblocki (Rupert) Graham

Rory Townsend Perfs Winner 2016
"I’m really interested to see how this years race pans out, we have a lot of young guns in this one with so much potential, Jacob Vaughan has been really strong at our team camp here in Calpe, Alex Paton is a previous winner and Alex Richardson really made a name for himself in the uk in 2018. Personally I’d love to see Louis Rose Davies take it, he’s my training partner and has worked really hard again this winter. Damien Clayton is my bet from outside the team to cause an upset!”


What do we think? As always the climb of Portsdown Hill will shape the race. We expect the Canyon DHB P/B Bloor Homes team to drive hard on the front perhaps as early as the first time up. Position is all important as the pace and the hill force the selection, those that miss the move will have to settle for some early season race miles in the legs as they contest the minor placings. We think the experienced Canyon lads will try and set it up for one of the youngsters, Jacob Vaughan could be the beneficiary and certainly loves the Perfs event having finished second behind Chris Opie in 2017. But despite Canyon's strength in depth and Tim Elverson's winning streak at Perfs, victorious in the last three edition, we are putting our money but not much, on 2013 winner Marcin Bialoblocki (Nopinz Latchem RT). Bialoblocki will not be intimidated, is well capable of going with the moves and, if the weather is rough it will suit him just right. Of course the bunch know all about his strength's so he will be marked well, he will have to work hard for the win, his winter training will face a thorough examination and the always motivated Canyon boys will certainly exploit any weakness. One thing is for sure, it will be a tough, competitive race and whoever adds their name to the Perfs winners list will have earned the right.

The Perf's Pedal Race will take place on Sunday 10th February 2019.Local Riders,Local Races will be supporting the 54th edition of the race allowing Mick Waite to offer a £250 first prize with prizes down to 15th place.

Perfs will cover five laps of the Portsdown Hill circuit starting from Southwick before turning off the circuit with 5K to go to finish at the top of Lodge Hill making a total distance of 74K.

The 46 mile race will once again be run over 5 laps of the Portsdown Hill circuit before switching to the Newtown circuit and the final at One Hundred Acre wood.* Race HQ will be at the D Day Memorial Hall, Priory Road, Southwick, Portsmouth, Hants, PO17 6ED, DEPART 11:00
COURSE DETAILS:
Start: NEUTRALISED outside Race HQ at Southwick, proceed to RAB on B2177 (M). DENEUTRALISE take third exit onto B2177 direction Wickham. Continue on B2177 to Staple Cross Roads (M), where turn left START CIRCUIT To South Boarhunt. Across the small bridge, bear right towards Boarhunt Mill. Once past Manor Farm continue to climb then bear left. Continue the climb, then turn left (M) into Swivelton Lane. Continue to junction with Portsdown Hill Road, where left (M), continue along Portsdown Hill until RAB (M) to take 2nd exit onto the B2177 to descent the back of Portsdown Hill to RAB at Southwick take the 2nd exit to Staple Cross Roads. Complete 5 laps then turn right (M) onto unclassified road to Newtown proceed through Newtown Village to crossroads. Turn left (M) onto Hundred Acres Road. Proceed on climb to finish line.
THIS YEARS FINISH IS ABOUT 20 METRES BEFORE THE LINE USED IN 2018.
Total Race Distance 46 miles or 74 Kms.
Lap distances : Portsdown Circuit 8.5 miles Newtown Circuit 3miles
on February 07, 2019
Email ThisBlogThis!Share to TwitterShare to FacebookShare to Pinterest